Facing a cancer diagnosis can be one the scariest things you’ll ever have to confront, something Geraldine Glowinski knows only too well. She spoke to us about her journey through cancer, and how cathartic cycling can be

It wasn’t until the age of 38 that Geraldine first started cycling. As a youngster she had always wanted to ride a bike and was an active person, but her brother was the only one in her family taught how to ride a cycle.

As she grew older and had a family of her own, they all became passionate about cycling and would spend the weekends racing together. Desperate to take part, her husband Marek taught her how to ride and she hasn’t looked back since – now she does more miles than anyone in the family. She’s out all the time with her cycling groups and in the spring, guides cycling camps in Mallorca for Legro’s.

Then, at the age of 61, Geraldine received the dreaded news – a positive cancer result. From diagnosis and through treatment she was determined to keep cycling as much as she could and spoke to us about the journey.

When were you diagnosed, and how?

In July, I was recovering from a hip replacement and looking forward to getting out on my bike again. It was then that I first noticed a lump in my left breast. For a while I kept checking and finally visited my doctor in early December, and he referred me immediately to the ONE STOP cancer unit at Mayday Hospital.

After a biopsy I was told I had Grade 2 cancer.

What treatment were you offered? Did the doctors tell you what to expect?

After the biopsy, I was scheduled for an operation which was meant to take place in December, but because of the busy Christmas period it was delayed until later in January.

Two weeks after the operation I went back to the specialist and he informed me I needed another small operation and then radiotherapy, or possibly chemo.

Did you have a goal to help you stay cycling as long as possible?

As I love cycling so much, I made it my goal to gently ride to the sessions six miles away at the Royal Marsden. I find public transport a nightmare and parking even worse.

I may not be able to continue, but that is my aim presently.

After your operation, you were advised not to cycle for a few weeks – how did you take that?

I have been gently road riding and mountain biking since shortly after my first operation.

I was advised not to cycle. However, I needed to be busy and surround myself with my cycling fraternity. I am a very social and active person and need to be myself. I was told not to cycle because if lymph glands were removed, drainage to my arms might be compromised.

As I didn’t have lymph glands removed, I felt that the doctors were generalising and not taking into account my ordinary life – which day to day involves cycling.

I’m convinced that being active reduces the time you feel ill, as it allows the medicine to get around the body faster and then be dispersed quicker hence fewer side effects

Did you have anyone who inspires you as started your treatment?

Five years ago, a male colleague inspired me to cycle to the hospital after he cycled with cancer.

At the time, he was having treatment for a severe testicular cancer. Amazingly, he still cycled throughout his treatment.

He carried on cycling for his wellbeing, and now he competes and takes on all sorts of challenges. He’s had setbacks but keeps going, and enjoys a better quality of life than many people who have not had this ‘glip’ in their life.

How are you feeling physically?

A couple of days after the chemotherapy sessions I felt a bit headachy and a little nauseous – a bit like a mild hangover, not so much energy.

Taste buds spoiled the taste of food and drink. This lasted only a couple of days, then I went back to feeling normal.

What do the doctors, nurses and other patients say when they find out you’ve cycled to the treatment centre?

When I’m asked by a doctor by phone consultation how I feel and what am I able to do, they are so surprised I still cycle to and from my appointments and feel so good, especially that I can eat and drink and have so few symptoms.

As I clip clop down to the treatment rooms, the staff do a double take and ask how far I cycled. When I say 6 to 8 miles each way, the reaction is surprise – but the most common reaction is “I really should cycle to work”.

I’m currently trying to persuade a nurse, who lives only three miles away and drives in the rush hour both ways through busy roads and traffic jams, to cycle in, instead.

I’ve told him it’s my mission to get him on a bike. He could go through a park and bridle path instead...it’s a no brainer really. 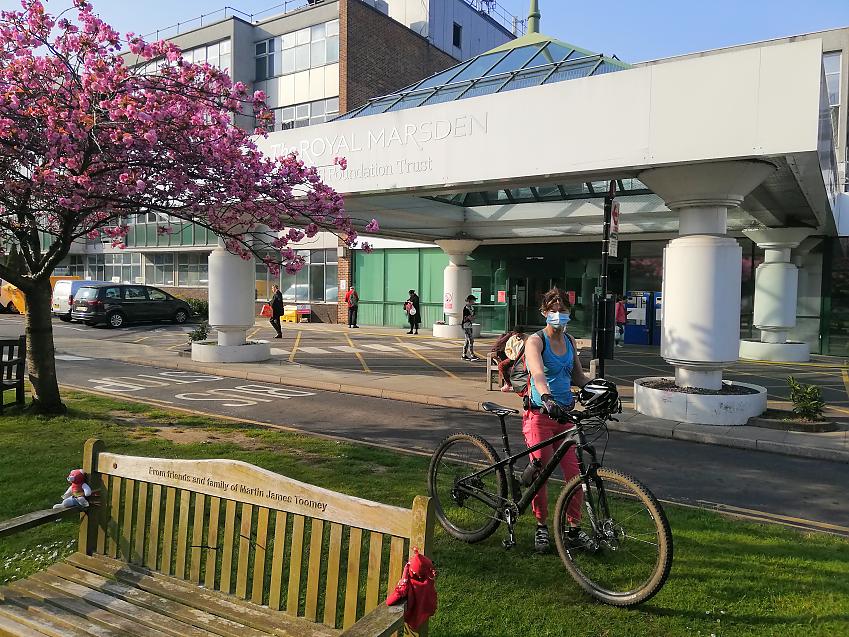 Geraldine cycles to her treatments

What other cycling are you doing at the moment?

The first few days after treatment I took a gentle off-road ride. I listened to my body and found that by the middle of the second week I could ride reasonable distances of up to 40 to 60 miles on my own.

I don’t try as hard as I don’t want to exhaust my reserves. If the weather is shabby, I’ll do some mild turbo at home.

Most mornings I stretch as soon I get up even if I feel sick as this makes me feel better. Actually, I just find that activity makes me feel so much better whether I’m walking, cycling , gardening or doing pilates. I’m convinced that being active reduces the time you feel ill, as it allows the medicine to get around the body faster and then be dispersed quicker – hence, fewer side effects.

How has cycling affected your cancer journey?

Cycling has allowed me to feel normal, especially doing an activity that is so engrained in my life. It helps me relax mentally and physically. I sleep well and eat well because of normal hunger pangs and natural tiredness. I go cycling with my husband and we have fun, taking a picnic in our pockets to enjoy in the wonderful countryside.

The only downsides are that I’m a lot more nervous on the road and going fast down hills. I presume my body is telling me to be more careful than normal. 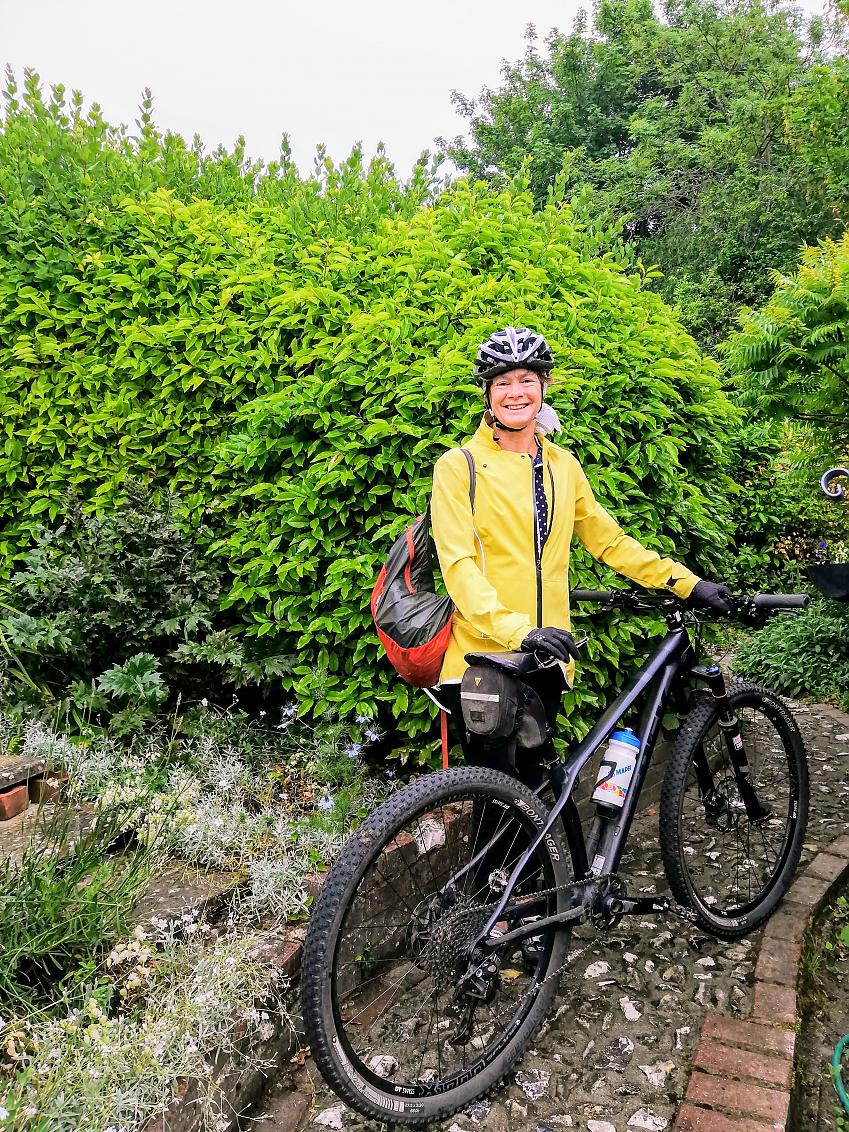 Geraldine finds that cycling improves her health, fitness and wellbeing

What are your cycling plans for the future?

I’m really looking forward to riding in cycle club rides and going on mountain bikes with my bike buddies. My challenge will be to get back to track riding at the velodrome, which makes me anxious to think about. However, I know if I can get it together it will boost my riding skills again and give me my confidence back.

Mostly, I look forward to the social tea stops.

Perhaps I might even get The Royal Marsden to include cycling in their activities which they provide in their beautiful MAGGIE CENTRE.

Geraldine featured in our final episode of Bants, Bikes and being Female today. Watch the series again on our Facebook page.

Inspiring cyclists: Amazing Alan gets back on his bike after a stroke and rejoins Cycling UK View

Bants, Bikes and Being Female View

Travelling with all senses: exploring the world by bike View