Reviewing the Pinnacle Chromium 3 WMS and the Genesis Skyline 20W

The two bikes on test are aimed at women looking for a hybrid that cuts the mustard as a utility/commuter bike, with scope to travel further afield with some luggage. Given this brief, the bike needs to be reasonably light, resilient, practical, and comfortable.

I took both through town and out into the Shropshire hills where the terrain is hilly. It was also much rougher under tyre than usual after a harsh winter.

Both frames use a configuration of double-butted, heat-treated aluminium tubing paired with an aluminium fork designed for a semi-integrated headset. Genesis opts for a compact frame design and tapered head tube; this keeps the handlebar at a comfortable height while affording good standover clearance with the sloping top tube.

The Chromium 3 stands out with its French style ‘mixte’ frame design, where twin lateral stays run from the head tube to the rear triangle. With no top tube, there will be a folding moment at play, but the twin ‘lats’ counter this very effectively, giving both torsional strength and generous standover clearance.

The mixte was originally designed for mixed usage in terms of gender – hence the name. Nowadays it’s seen as a variation on the ‘step-through’, but still requires quite a high stepping action.

The Chromium 3 has a slightly steeper seat angle than the Genesis Skyline: 73.5 degrees versus 73. I liked this climbing hills; being positioned over the pedals gives a palpable sense of power delivery. The 55mm fork offset gives good toe clearance should you want to wear boots. When combined with the head angle of 72 degrees and 47mm tyre width, the handling is light and nimble.

The trail of 53mm allows you to quickly dodge a pothole, yet the bike is nice and stable on descents, as is the Genesis Skyline. The Skyline’s stated trail is 74mm, although I calculated 78mm, and the handling is correspondingly a little less responsive at slower speeds.

You could argue this enables the rider to feel more relaxed on longer stretches, but other factors need to be considered, such as the rider’s relationship with the handlebar.

Both bikes feature a hard-as-nails powdercoat finish. What this lacks in lustre is made up for in resilience. Similar colour choices from both companies show that turquoise is evidently a current favourite for women’s cycling. The matt finish of powdercoating looks good with the current trend for matt black componentry. 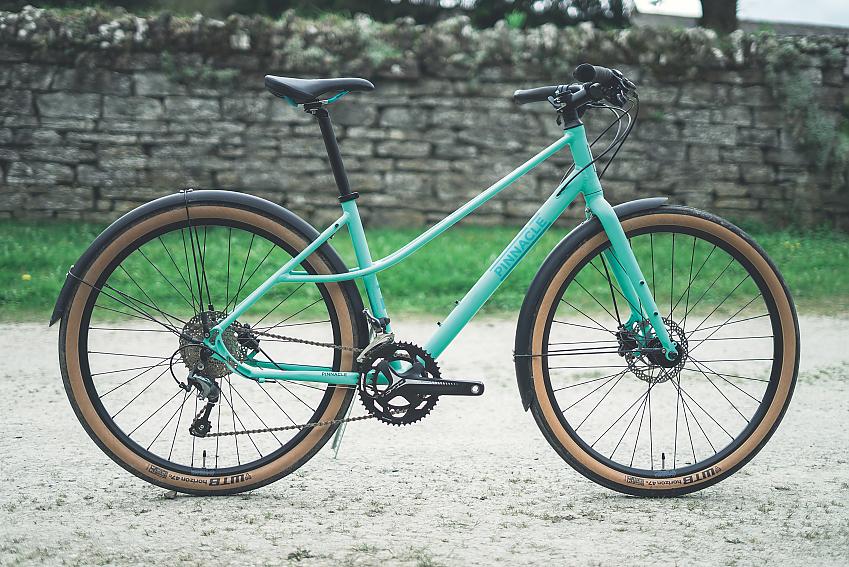 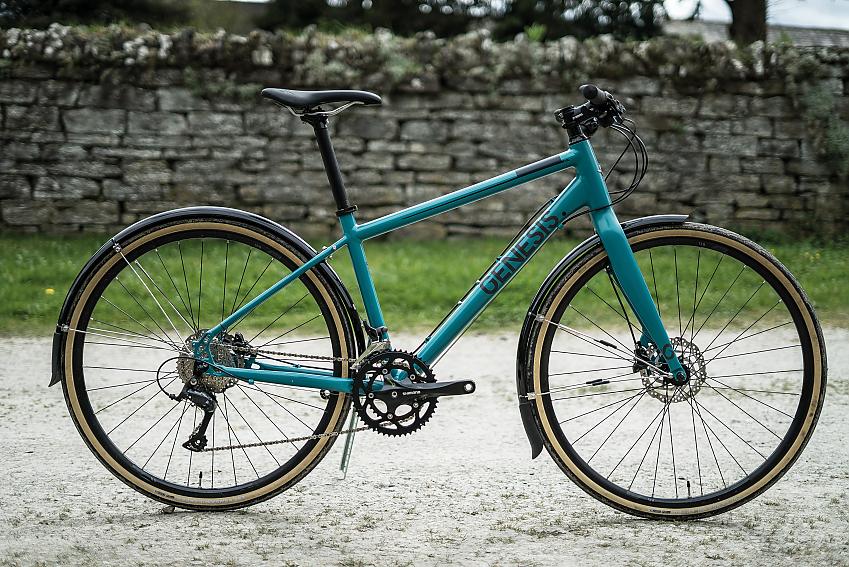 Genesis Skyline 20W – no front rack mounts but it’ll take a rear one, plus a kickstand

Although the industry owes a huge boost in sales from affordable lightweight aluminium bicycles coming onto the market in the 1980s, I’d describe the ride characteristics of aluminium as rather unforgiving and almost ‘jarring’.

What’s noteworthy about the Chromium 3 is its wheel and tyre combination. The 47mm-section herringbone file tread tyre on a 650B wide rim does a great job of dissolving this ‘harshness’ – particularly important with a straight-bladed fork.

Recommended tyre pressure is 45-65psi. I ran the tyres at 55psi and was pleasantly surprised by the heady mix of comfort and speed.

With a narrow rim and higher tyre pressure, a tyre rolls up and over every road bump, requiring more effort from the rider as the wheel axles describe a line like the ups and downs of a share price.

A wider rim with a larger air chamber, requiring less pressure to match the same counter-force, enables a smoother ride as the tyre conforms to the rough road, effectively shortening the distance from A to B so it’s actually faster. 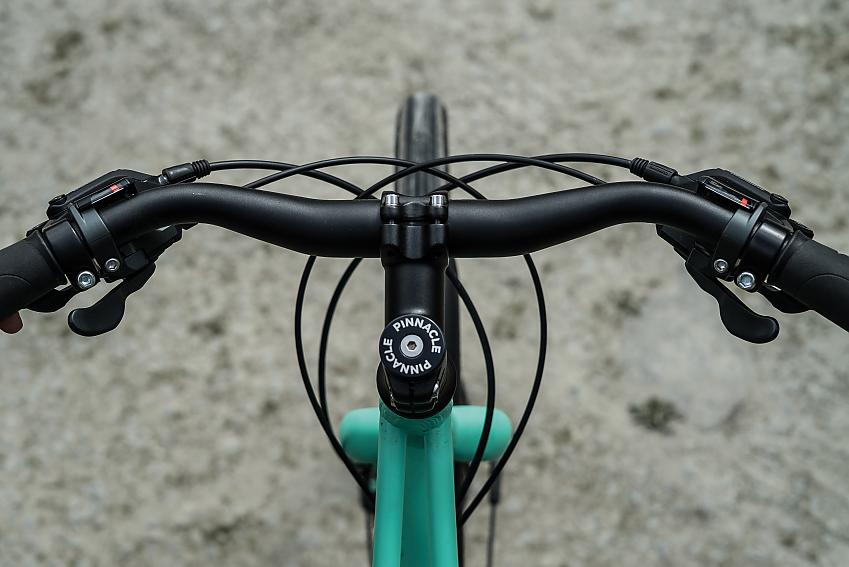 Riding the relatively slimmer 700×35 tyres of the Skyline felt familiar, but I noticed more road shock through the handlebar. This had a cumulative effect the longer I was in the saddle; I wanted to relax and shake out my arms while riding. This was also down to the handlebar shape: with only a 15 degree sweep, I felt my shoulders and neck muscles were not as relaxed as they could be.

The Chromium 3 handlebar has more sweep and instantly felt more natural to ride. Both bars feature lock-on ergo grips. The ‘fin’ or ‘wing’ facing the rider prevents the wrist from dropping down and putting pressure on the ulnar nerve (potentially leading to Carpel Tunnel Syndrome). When setting the handlebar angle and grip position, make sure this ‘fin’ is horizontal or it will not be doing its job.

There’s only 5mm of extra space each bike's steerer, so you'd need to fit a new stem to get the bar higher

Saddles are personal but I found both agreeable with their slight central groove. Width was adequate for my sitting bones, given the angle of my spine and pelvis in the riding position. I wore Swrve cycling jeans (stretch Cordura), which feature a gusset, and I was pleased they worked with the saddles.

I noted the Skyline had printed gradations on the seat pillar – very useful if you have to remove this regularly.

Unfortunately, there’s only 5mm of extra space on each bike’s steerer, so you’d need to fit a new stem if you wanted to raise the handlebar higher than this. Both bikes come with 70mm × 7 degree stems.

As often happens, the handlebar controls are fitted right up to the grip on either side without a thought given to actual hand position and function. A gap of 8-10mm between grip and brake lever allows the index and middle finger to come to rest naturally on the brake lever just where it sweeps in. This matters if you have larger hands as your thumbs can otherwise feel cramped and even rub against the shifter while riding. 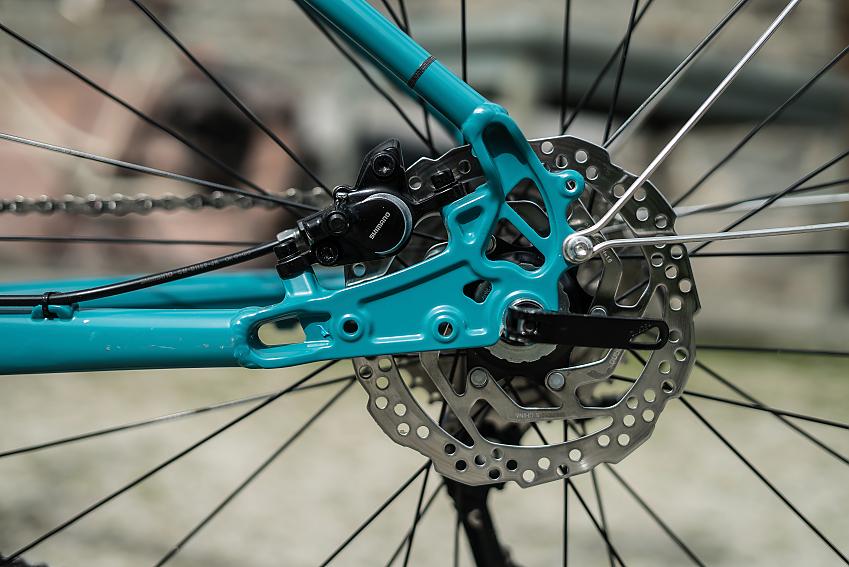 Useful mudflap and kickstand mount on the Genesis

Nowadays, gearing is referred to by the number of chainrings and cassette sprockets: ‘one-by-eleven’ and so on. The Chromium 3 is two-by-ten, the Skyline two-by-nine. For commuting and recreational days out, you will value low (hill-climbing) gears and enjoy having gravity on your side as you descend. With luggage on board, low gearing is even more important as it’s easier to twiddle uphill than dismount and push.

A front derailleur must be set up precisely and used with sensitivity; the pedals must turn to change gear but not under pressure. Learning this is quite difficult for someone new to cycling. Then, just when you thought you understood it, there’s the ‘trim’ facility to take on board. A ‘one-by’ system is an excellent solution in my opinion, and I hope we see it trickle down to a much greater extent.

The braking is powerful, with very light action, on both bikes, which both use Shimano hydraulic 160mm disc systems. Practise using them at slow speeds if unfamiliar and don’t use a spray chain lube, as the mist will alight on the rear rotor. 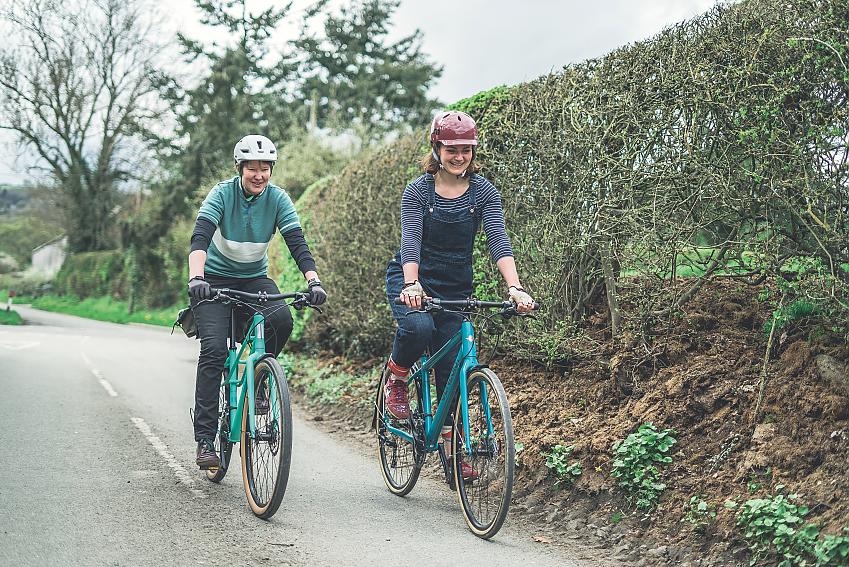 It’s good to see mudguards as standard. The Chromium opts for a traditional look in keeping with its French influence. These would be even better with mud flaps as sported by the Skyline, as a considerable amount of water sprays off a wide tyre. The Chromium’s Allen key ‘quick-releases’ are straightforward and arguably easier to understand and operate than the Skyline’s traditional 9mm and 10mm QRs.

If I was towing a trailer or loading up a luggage rack, the option to attach a kickstand is nice to have. Rear stay fitting kickstands are particularly good, with more weight around the rear axle. The Skyline has just the fittings all ready and waiting.

Longer rack extensions may be required to get a luggage rack level but some racks have adjustable height settings to make this easier. I fitted a saddlebag and the Bagman quick-release support, which was a doddle. It was good to see mounts for a bottle cage on both frames. The Skyline’s bottle position is more easily reachable when riding but only the Chromium offers fixing points for a fork-mounted rack.

For me, the Chromium 3 has the edge over the Skyline thanks its wheel system and more relaxed riding position. Changing the handlebar on the Skyline would be inexpensive and would make me happier, but the Chromium’s lower bottom gear would still be a deal breaker for hillier terrain. Both hybrids can take a luggage rack for panniers or commuter bags, and the Skyline is even kickstand ready. 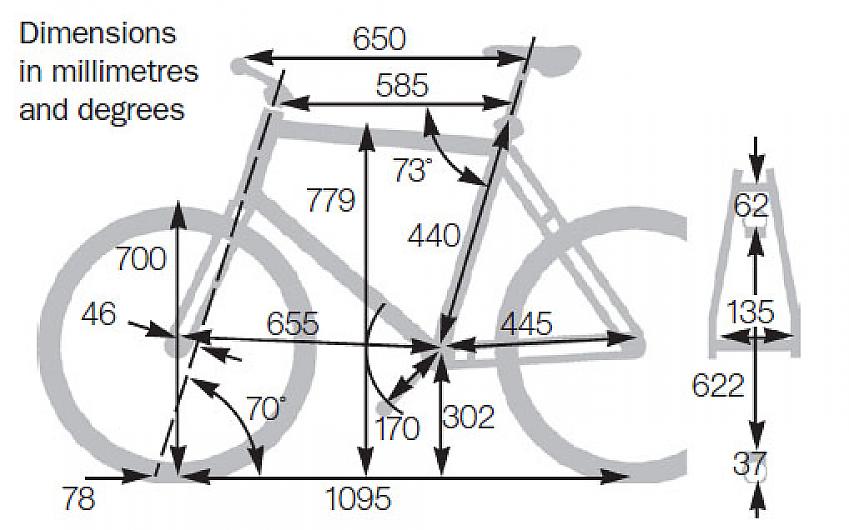 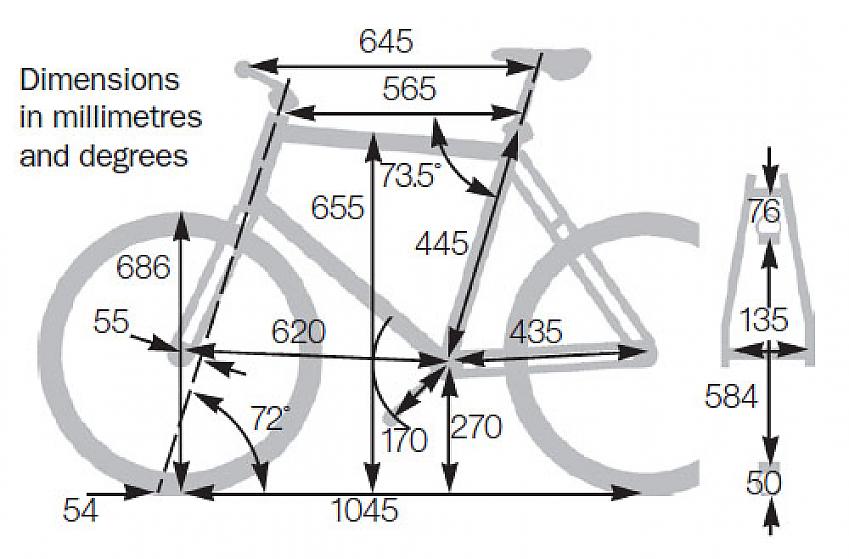 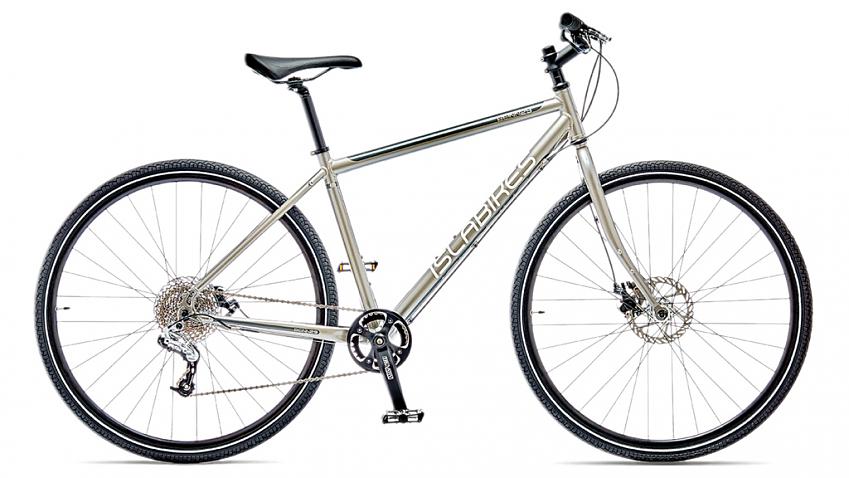 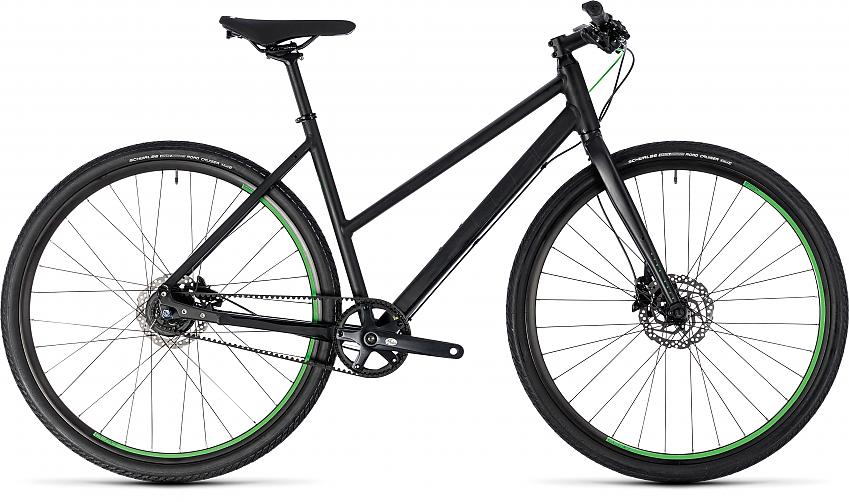 Ask the expert: Liz Colebrook helps you look after your bike in winter View